Soaring high above Darwin in an Airplane .....

The Military Air Museum found on the grounds of the current airport in Darwin, is a large purpose built shed that houses some extraordinary aeroplanes.  The first thing you will notice as you enter the shed is a massive B52 bomber which takes up the main part of the shed. It is nearly the length of the shed and just about the same in width.

The B52 was a donation from the American Air Force and when they tried to move it into the shed (thinking that the shed they built was big enough) it was too big. The wings and tail wing were too wide and high to fit through the doors. Find out what they did to fit the Bomber inside to keep it safe from the weather.  You are able to climb stairs near the cockpit to see inside the plane, and view the instruments  inside.  Underneath you can see where the bombs where held, another massive area.  It is very big and heavy in size and would make you wonder how it ever lifted off the ground.  It is pretty awesome to see up close.

On the left side of the entry doors are some glass cabinets which   hold   some amazing items from the war times, This includes   instruments   that assisted pilots with navigating, book keeping   among other   instruments.  There are some memorabilia from the   old days of Ansett   Air Lines and TAA. Items such as carry bags,   photos and uniforms,   propellers, tail wings, other early equipment   that was used before more   sophisticated and computerized   instruments were invented.  It sure   makes you appreciate what we   have today. 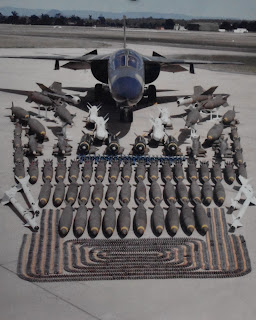 On display is an F111 along with a photo of all the armory that it can carry. Who would think that one plane can carry so much ammunition in one go.  There are plenty of propellers, engines and other parts of aeroplanes that have been found around the Darwin area.  A gun Turret which once lived on the top of a plane.  One green frog, tried to get into the turret but could not.  The soldier who climbed into the turret would have to do it backwards and be flexible and thin.  No padding on this seat either.  Imagine sitting on this metal seat for hours during a mission, hmm could be hard on the backside.

Near the entry to the back area is a small theatre set up so that you can watch a film about the bombing of Darwin.  Which was bombed more times that Pearl Harbour, sadly.   On the floor is a B-25D Mitchell #41-30222 Hawg mouth.  There are mission symbols on this plane.

There is a Navy helicopter that assisted  in   the clean  up after Cyclone Tracy.  A CAC Avon Sabre   which has a hole that goes through the air craft from the front to the back.  Plenty of air craft have steps up to the cockpit so that you are able to see inside and look at the instruments that the pilots used.
During your visit there is plenty to read on the history of Darwin and research on each of the planes that are now housed in the museum.  There is a shop where you are able to buy souvenirs, stickers, books, T-shirts, cups, and other items to remind you of your visit.
🐸  Will you enjoy the displays and learning something new?
Admission price Australian history drinks educational family Museum (wheelchair friendly) souvenirs War history.
Location: 557 Stuart Hwy, Winnellie NT 0820, Australia

It is the weekend and you're looking for somewhere different to visit.  Why not try Old Petrie Town. Located in the Brisbane suburb of Petrie. It has many stalls and attractions that will please the whole family.  Old Petrie town is also open Wednesday to Friday if you are not working during the week and want to visit or even to take visitors there to enjoy the relaxed atmosphere.   And if you are hungry there are places to find food for many different taste buds.   When you arrive, you will notice that there are many different shops with the old time frontage.  The walkways are bitumen and they are a pathway around the grounds.  The markets do not start until 10am, so there is not an early start to find that elusive bargain.   Some of the many stalls include but are not limited to the following:  crafts  book stall  used goods  clothing  collectables  plants  vegetables (locally grown)  music shop  honey (locally produced) Food shops and those in the old barn building (many other
Read more