Showing posts from September, 2020
Show All

Bert Hinkler Hall of Aviation and his English home..... 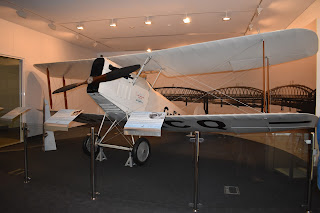 We both had never visited here before, and so when we were having a short holiday in Bundaberg we decided to visit the Hinkler museum. The admission fee is for both the hall and the house. Bert Hinkler's plane  There is a replica of Bert's airplane that he actually flew under the Burnett traffic bridge, and when you look at the bridge it would have been an amazing feat.  Further into the museum you will find another airplane which you can sit in and in front of that one is a large box brownie.  With this brownie you can take a photo of the airplane and someone special and email it to yourself.    There is a plank that you can lie on and try gliding by moving the steering stick to glide with the screen in front of you.  There are also 3 different flight simulators where you sit in the seat like your are actually flying and you are now the pilot flying an airplane. These are fun and children would enjoy them and try to fly.   Simulator glider Hanging from the ceiling you will fin
1 comment
Location: Mount Perry Rd & Young Street, Bundaberg North QLD 4670, Australia
Read more

It is the weekend and you're looking for somewhere different to visit.  Why not try Old Petrie Town. Located in the Brisbane suburb of Petrie. It has many stalls and attractions that will please the whole family.  Old Petrie town is also open Wednesday to Friday if you are not working during the week and want to visit or even to take visitors there to enjoy the relaxed atmosphere.   And if you are hungry there are places to find food for many different taste buds.   When you arrive, you will notice that there are many different shops with the old time frontage.  The walkways are bitumen and they are a pathway around the grounds.  The markets do not start until 10am, so there is not an early start to find that elusive bargain.   Some of the many stalls include but are not limited to the following:  crafts  book stall  used goods  clothing  collectables  plants  vegetables (locally grown)  music shop  honey (locally produced) Food shops and those in the old barn building (many other
Post a Comment
Location: 901 Dayboro Rd, Whiteside QLD 4503, Australia
Read more
More posts