The Mysteries of Saint Helena Island......

The Captain is calling, " All on board, Stop smiling prisoner 321, this is not a fun ride, get to work."

The captain is assisting the passengers on board the Cat "O" nine tails, this is the boat that takes you out to the Island of Saint Helena.  Originally a Leper colony and used for Quarantine, then changed to a prison for men only when Boggo Road Prison became over crowded.  Peel Island became the place for Lepers.  The last leper left Peel Island in 1982 and was transferred to Princess Alexandra Hospital.

Prisoners were only allowed 1 visitor every 8 weeks for a time period of 20 minutes.  Back in those days there was no motors on the boats to get out to the Island fast, so it was a long trip for a visit.  A guard was present at all times.  The visiting room, if you could call it that, had the visitors on one side and the prisoners on the other so that they could not touch or pass secret messages.  The guard would walk between them at all times during the visit.  There was no such thing as a free ride out to visit their family member either.

Cell Block B held 12 prisoners per cell.  Their soft bed was a hammock, two high above each other with a bucket for the toilet and no privacy.  The walls were all stone and in winter not very warm. Prisoners did all the work there, from baking, farming, harvesting, butcher, boot maker, blacksmithing, carpentry, and clothing. The items that were made on the Island were not just made for those living on the Island they were for the mainland too. When the wardens wife held a garden party on the island, one prisoner would be made to ride a bicycle behind the shed that would make the water flow in the fountains around the gardens.

When the prisoners arrived on the Island their pack consisted of a tin cup, plate, knife, fork, spoon and a comb.  Which seems funny as the prisoners where shaved every couple of weeks.  After 3 months if the prisoners where behaved they would earn luxuries like tea, sugar, soap and tobacco.  These they could trade with other prisoners if they wanted something else.  Bathing was done in the ocean in all weather conditions.

The Bakers had a private cell behind the ovens, which was really nice in winter, but in summer the heat would be so unbearable the prisoners would ask to be chained up outside to sleep.  Bakers were kept there so that they did not have to wake a guard in the early mornings to begin their job.
The island was also a farm, growing cabbages and sweet potatoes, sugar cane, cattle and sheep.  Now you can see why the diet of the prisoners was not very varied in different types of foods. Later it became a cattle farm and dairy.  Now  it is a National Park and Queensland's first historical site in 1980.
There is the remains of a Lime kiln which would burn shells, coal and coral.  The prisoners would have to keep the kiln burning constantly,  this was hot work and if it came in contact with their skin would burn them.  There are some olive trees growing on the Island and at the1889 Paris Expo the oil from these olives was voted best in the world.
The Island at any time would be home to 50 guards and their families, 350 prisoners.  Three months to Seven years was considered short term.  Seven years to life - Long Term.  When a prisoner passed away on the Island they would be buried with a cross on top and given a number, their name was not put on the cross.  Prisoners were asked to whip each other.  Prisoners could be given time off their sentence if they whipped another prisoner.  They were not allowed to be gentle, it had to be hard and forceful.
The  tour includes lunch, which is at the top of the Island.  Drinks such as alcohol and soft drinks, you are asked to pre order on the way out to the Island as it has to be carried to the top.  After lunch the Captain and 2 prisoners give examples of the whipping that happened and ask some of the children in the tour to take part, which is really good and makes it interesting for those involved.
This tour is very interesting and one which these two green frogs would recommend that you take.  The three main men that do the role play are very good and show how they dressed in those days.  The visual plays were good, and you can see how they were treated in those days.  It was a hard life and nothing like today.  The prisoners were not just there to live, they were expected to work and work hard.
The Island is only accessible by boat tour.  The walk around the Island is approximately 3klm on grass, there is a courtesy bus for those who find the walk too much in some places.  It is not wheelchair friendly, though we would recommend that you call the  company and ask before making a booking.
🐸 What other mysteries and facts can you "escape" with from one of Queensland's most Notorious Prisons?

From Ginger to Macadamias......

After a visit to the Ginger factory, across the road is Nutworks. In Australia macadamias are grown in the fertile soil along the east coast from the Nambucca Valley and Byron Bay hinterland in NSW, to the Sunshine coast,  Bundaberg, Atherton Tablelands regions of Queensland and are now being grown in Western Australia. At the entrance to Nutworks there is a café and shop.  They sell all sorts of confectionery made with chocolate and macadamia nuts, nougat, ginger chips and chocolate covered coffee beans.  Out the back there are glass windows that show large mixers with a pipe facing inwards to the barrel.  These are used for coating the nuts with chocolate.  As the barrels move round the chocolate evenly coats the nut and creates nice yummy sweets.  The factory has tours from Monday to Friday, though on the weekend you can see part of the factory and there is information on the wall. Macadamia nut oil. Macadamias are a native tree to Australia, with their indigenous name b
Read more 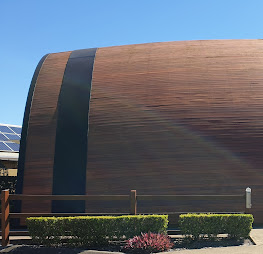 While in Bundaberg you should make the time to visit the Barrel, or Bundaberg's Ginger Beer factory and see what it takes to make this Aussie icon so yummy and delicious.  It is great for the kids to visit too as they can get to see, touch and taste the flavours that make the drink fun.  Bundaberg brewed drinks are a family owned business, started by the Fleming family who still run it today.  The factory was established in Bundaberg in 1960 and now export their product around the Globe.  In 2004, securing the best crop of ginger Bundaberg ginger beer factory instigated the planting of their first ginger crop in Bundaberg.  Then in 2005 The Barrel was built next to the factory as a tourist attraction The Barrel When you arrive and pay for your tour, you are given a cardboard crate that you can place 6 flavours in of your own particular taste.  Although this tour is not long it is however very interesting and informative and well worth the visit.  Upon entering the door to the tour
Read more