It was the trip we had planned for nearly 12 months. Hiring a houseboat and cruising the river system and visiting all the bays and walking the beaches.   Climbing the hillside to find a pool of water above a waterfall. 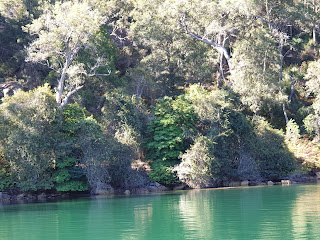 Our first night was spent  in Yeomans bay, included was some fishing and the hope of catching dinner.  Yummy fish straight from the water.   The bay was lovely and quiet with plenty of fresh air and nothing.  This is what we came here for rest and relaxation.  Oh and no internet or phone service.  As the afternoon wore on and happy hour began there were 2 boats out near the mouth of the bay, hmm oh no, and yes the dreaded party boats had like our quiet little bay too.  Though as the night wore on it became not so quiet.  We were warned that this could happen, and hoped that it wouldn't.  Oh well now we would have to make the most of it and relax anyway.

If you wish to holiday in a place where there is no internet or very little phone connection then this is the place.  Especially in the off peak season and during the week.  This is
how we chose our holiday.

There is plenty to see for those who wish to take photos of scenery, flora and fauna.  You never know what you might see, We were having lunch of chicken breast, Bread and cheese on the beach at shark bay and unbeknown to us there was a goanna behind us.  We were lucky that it didn't want to come and share lunch with us. 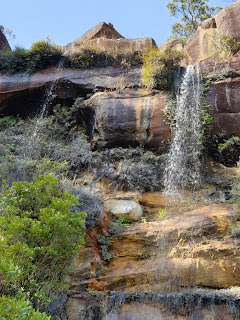 Along the Hawkesbury there are 2 islands, one is Peat Island where back in history it was used to house the intellectually handicap or those insane.  It is a sad story with many deaths and tails of misfortune.  Though this place is not in use today and has not been since 2010, it holds sad memories. When reading of its past I felt a sense of sadness that this happened, today we are more aware of those less fortunate than ourselves and we make every effort to help and assist those who need help.

The other island is Milson Island , which was a prison.  The information reads that prisoners would jump into the water to escape.  The island is not far from the mainland so you could understand why they would try.
There is plenty to see and we would recommend this part of Australia to visit, take the time to see and explore.  In many places there are hidden treasures.

It is the weekend and you're looking for somewhere different to visit.  Why not try Old Petrie Town. Located in the Brisbane suburb of Petrie. It has many stalls and attractions that will please the whole family.  Old Petrie town is also open Wednesday to Friday if you are not working during the week and want to visit or even to take visitors there to enjoy the relaxed atmosphere.   And if you are hungry there are places to find food for many different taste buds.   When you arrive, you will notice that there are many different shops with the old time frontage.  The walkways are bitumen and they are a pathway around the grounds.  The markets do not start until 10am, so there is not an early start to find that elusive bargain.   Some of the many stalls include but are not limited to the following:  crafts  book stall  used goods  clothing  collectables  plants  vegetables (locally grown)  music shop  honey (locally produced) Food shops and those in the old barn building (many other
Read more